Freedom, What is it really? 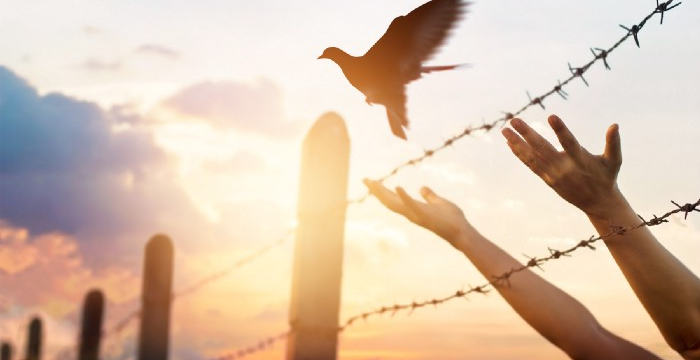 What Costs Have We Endured for Freedom?

Freedom has been at the forefront of my awareness recently.

As I consider the American Independence Day celebration juxtaposed to the lockdown of the pandemic and the anti-racism movement, I’ve begun to question all that I held true about freedom.

What does it mean, Freedom? As always, depends on your perspective.

Given our country was founded when human consciousness was primarily centered in a worldview of taking care of “our own,” it’s not surprising that America’s foundations were shaped in separation and discrimination.

And, perhaps like you, I’ve been remembering my first exposure to racism and bigotry.

I was 3 when I watched with horror and confusion the civil rights riots on my family’s black and white television. I’d be perched on the brown shag carpet, waiting for the nightly news when my daddy came home from work. When he finally kicked up his feet in his pleather recliner, I’d have to turn up the volume knob loud enough for him to hear, as he’d lost partial hearing on a gunship in the Korean War. I liked watching the news with my dad, as he would explain worldly events to me at my young age. And I certainly didn’t understand why so many people were being beaten or hurt in the streets as they carried signs. Later he’d try to explain to me why so many soldiers were fighting against communists in a country called Vietnam.

I recall his explanations as not always making sense, especially as I listened to the larger conversation about the marches in the street. I vividly remember around age 4 begging my father, “please don’t use those bad words” to talk about people just like us who had a different colored skin or lived in different neighborhoods where I grew up in a small town near Houston.

Things just didn’t add up. The stories I heard didn’t fit the images I saw on TV, nor the kinds of people I experienced at school or church. I knew we were all God’s children and I wanted everyone to love each other.

Later I would find out that my lineage included colonists, slave-owners, confederate soldiers and homesteaders, across a variety of states. These facts were hard to swallow as an adolescent, and even harder as an adult. Even though my ancestors theoretically fought to preserve the liberties of freedom this country was founded on, the horrors of how those “freedoms” were earned were never justified for me.

The Irony of Freedom.

The irony of our celebrated Independence Day is profound. Of course this American holiday represents the hard-won freedom of a rough-and-tumble young nation of colonies that overthrew the oppressive mandates of a tyrannical king in the eighteenth century.

My schooling in American History told me the Founding Fathers who led the movement against Britain’s crown were leaders in their communities and several were prominent in national affairs. Largely they were revered as stalwart and courageous for seeking autonomy and self-governance by throwing off the harsh autocratic rule and unconstrained taxation. They were seeking liberty to rule their own lives, wanting nothing more of the constrictions of the regal ruling classes of Europe.

Yet they were also the educated elite, residents of older settlements in the “new” America, and belonged with a few exceptions to a moderately well-to-do class representing only a fraction of the population.

The Declaration of Independence was basically a resolution to break with the tyranny of the King’s rule. The Constitution was designed to hold the colonies together through legal process. And the Bill of Rights’ Ten Amendments specified the things the founders didn’t want for the fledgling nation of (white) people, including protections to prohibit the constraints and constrictions of subjugation, including freedom of speech, press, and religion, and creating due process of law, and reserving all powers not delegated to the Federal Government to the people or the States.

This nation was built on principles designating what we didn’t want, instead of a vision for what we did.

And to accomplish this freedom, the early “pilgrims” and later colonists built a country based on the same principles of subjugation and tyranny that they’d been trying to escape.

How ironic is it that America was founded on the principled rejection of subjugation and tyranny, which was then inculcated into every structure of the young nation. Our structures were not designed to care for us, but to avoid being bound and oppressed by an absent landlord.

Our country’s structures were created to care for those who were already secure, out of fear of losing their security, rather than for those who had nothing to lose.

Perhaps the perceived American idealism and “can do” spirit is more accurately portrayed as, and rooted in, the rogue spirit of lawless plunder to avoid domination. You may disagree, or take offense at that possibility, and yet consider how our forefathers arrived at “owning” so much land and bounty in this vast landscape called America. Then the plunder was turned into politics of the same hue. And we wonder why we are where we are culturally.

The fear of subjugation long ago overshadowed the desire for producing something much grander and visionary than what America has stood for.

So in fact, as we know is true in holographic systems, a construct of quantum physics, the fear of tyranny and subjugation only created more of the same. The leaders of this country led the nation to enact structures that would prevent the powerful from becoming enslaved, only to create oppression among less powerful cultures and people, and thus among ourselves. Over and over again, throughout every era of our young country.

How to Value Freedom Now?

How fitting it is this year that these symbols will be limited, both because of the pandemic that’s virtually shut down the country, and by the effectiveness of the Black Lives Matters movement to dethrone white supremacy at long last.

In at least some part, the American pride that many of us grew up with is in tatters, replaced with shame about the blind denial of racial and cultural subjugation, slavery and bigotry. The truth of America’s founding has finally been revealed and acknowledged by the vast majority.

The colonist states turned united states could never have grown to be a superpower without rigging its economy through the theft of native lands and slaughter of indigenous peoples. By building its economic and political structures through the toil of enslaved peoples whose culture and personhood were stripped from their backs. And even more recently, by welcoming the “huddled masses” to become the new “essential workers” that have kept the nation afloat, century after century, and illuminated during the recent pandemic.

Freedom from What Matters

In the last few months, during the global pandemic and then the Black Lives Matter and related social justice movements, people of this country have been fighting for freedoms that seem more relevant to the well-being of humanity than some of the freedoms on which our country was founded.

Freedom from unwarranted violence and brutality.

Freedom from the tyranny of unjust social infrastructures.

Freedom from the bigoted mentality of white supremacist perspectives.

Is it time for us to reshape the American culture, economy and every infrastructure in the land to more aptly liberate all of us from this scourge of dependency on enslavement and servitude of those who have less power?

Freedom as an Inner Job

And in truth, even if these freedoms were granted tomorrow and infrastructures reconstructed, living in a country that was founded on such blatant fear and inequity would require each of us to purge ourselves of the internal consequences of the Founding Fathers’ limited vision.

We literally wanted freedom from our internal tyranny. And we didn’t get it.

It is virtually impossible to find “freedom” when you’re attempting to escape something. Instead, you just project and impose your internal fears of subjugation onto others. It is a holographic principle that

What you experience internally will be manifest externally.

What do you, and we as a country, want instead? Rather than “freedom” from tyranny, what if you chose to envision who you are truly meant to become? That which is your soul’s destiny? And to create your future life, work and relationships from there?

If we are individually and collectively attempting to overcome the entrenched Shadow of our culture, individuating away from the material values of the concrete into a more evolved collective stage of being, we must find a way to focus our sights on something more intentional and visionary than solely rejection of our tyrannical forefathers’ failings.

Freedom from Fear. Walking toward a Purposeful Vision.

We must right the wrongs that have been inflicted on the peoples of this country and of the many others that these United States have bullied over the centuries, if we are to ever reclaim a proud and powerful place in the world. We must build new structures, new cultures and new values that hold life and true liberty in greatest esteem, over property, possessions and politics.

We must embrace the reconciliation of former atrocities with both hope and humility. As a changemaker and mentor, I pledge to continue to devote my life to create not only a just and equitable world for all beings, but to empower and inspire every soul to live into its greatest potential, regardless of perceived limitations.

As a Guardian of the Global Purpose Leaders membership group, I am honored to serve as best I can to repair what has come before, and will participate with this esteemed body to do our part. See our GPL statement here.

And I will continue to invite you into your grandest adventure, a life of true purpose. To help you find clarity so you can live into your greatest expression and contribution. So you too can feel the power of being all that you intended to be.

If you are ready to uncover what your purposeful life can look like, schedule a Discovery Consult with me here. Let’s talk about what it would take to create your own vision for making a difference now.

Or download the Purpose to Impact Roadmap. This is doable. I’ve been studying and practicing this work in my own life and with people like you for decades and it works. It is neither woo woo nor impossible to live that life you dream of.

And, even if you’re not quite ready, I’d love to help you gain purpose clarity, create alignment and build lives, work and business, I’d love to hear what matters most to you. Please schedule an Exploration call with me to explore what you need now to live more purposefully.

Let’s clean up our internal tyranny and subjugation to fear of domination and become the empowered, sovereign and powerful people that we each are.